Recycling Program
El Yue Agro-ecological farm does not simply have an agricultural basis. Rather, it is an organization committed to sustainable practices in all aspects of life. One of their projects is a recycling 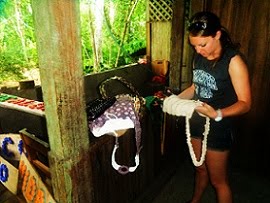 program that has been influential within their entire community. In the photo, one of my classmates is looking at some of the products made out of recycled goods, including one of the bags made out of plastic. They have spread awareness about the need to recycle. However, the farm itself has gone above and beyond simply recycling and having their goods shipped off. Rosa, one of the founders of the organization, believes in living simply with minimal waste. Consequently, this lifestyle choice was applied to El Yue. Each product is not seen as an end in itself, but rather something that can be molded. It becomes a means to a new end. With creativity, Rosa, and the other seven families involved in the organization (a total of twenty two people), transform some products into table mats, plastic bags into elaborate purses, bottle tops into clasps on bags, and so forth. The ideas and range of products seem endless and there is demand for the products within the community, as well as from tourists and the local pulperia (convenience store). The original goal of this project was not economic though. Instead, the founding women wanted to decrease the waste the organization produced. They wanted to decrease their ecological impact and have managed to truly achieve this goal by using the excess goods that would have been buried or burned. Thus, El Yue has been reducing their carbon footprint through this wonderful and sustainable waste management program. This alternative of reusing the goods has further contributed to the increased well-being of those members of the group. Many of the women involved in the organization are single with children. So, this recycling program helps the women to earn enough money to support themselves, their families, and even send their kids to school. It has helped the development of the community as a whole, while also addressing gender inequity. The program gives the women in the community the opportunity to break free from the feeling of reliance on the men in the community and make a living for themselves adequately. 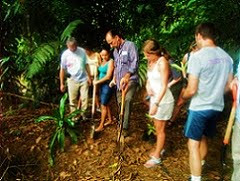 Deforestation is a significant issue with effects that are felt globally. However, for the women and families at El Yue reforestation efforts are extremely important. The farm itself is located in a biological corridor. A biological corridor is an area that needs to be preserved because it is recognized as important to protect certain species. The concept is to provide more habitats for the species, yet it is not completely protected. Rather, there are regulations put in place, such as banning hunting in the corridor and so forth. This particular Costa Rican biological corridor starts along the coast and spreads to the mountains. El Yue is one of several places that is a bridge between completely protected areas. For this reason, the members of the organization decided to pay special attention to the issue of deforestation. Ecological preservation and conservation is very important to the organization. In conjunction with preserving their property as part of the biological corridor, they also have a nursery on the property where they participate in reforestation efforts. While our Semester at Sea class visited, we got the opportunity to assist in planting these native species to help provide food and habitat for the animals living within the corridor. The trees also offset emissions, and thus decrease pollution. So, while this farm in particular does not emit many pollutants, they are offsetting the pollution of the community as a whole, benefiting and preserving the natural capital of the land surrounding the farm.

Medicinal Plant Garden Project
Dedicated to organic farming and sustainability, El Yue Agro-ecological farm began a new project of a medicinal plant garden in 2001. In the photo, one of the organization's founders is telling my class about the farm. El Yue was originally dedicated solely to organic agriculture, focusing mainly on growing fruits, herbs, and vegetables at the local farmers markets. However, they also used many of the products themselves. For example, the products they gathered from their on-site organic banana plantation a 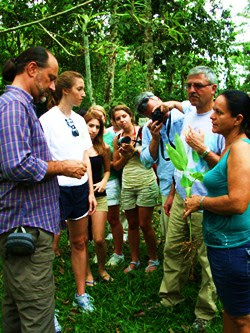 nd vegetable gardens were fed to the animals and were used for their own consumption. In an attempt to increase the farm’s plant diversity and their production of advantageous goods, they spearheaded a new project, a medicinal plant garden. At the beginning, this garden was solely for the members’ own consumption. From the plants, they made numerous teas. That same year, 2001, a volunteer at the farm gave them the idea of trying to bring ecotourism to the farm. Originally, the farm had only focused on the organic agriculture because most of the products the community had access to were all loaded with chemicals from traditional agriculture and shipped in from other places. For health reasons, they wanted to become independent of corporations and big business by growing locally. By adding to their harvests and growing medicinal plants, they not only increased their production of beneficial and healthy products for their consumption, but also created a draw for tourists. So, not only had the farm become a sustainable business economically, but they also increased the diversity of plants. They found yet another way to use their land effectively, as well as create a draw for sustainable tourism.

Restaurant
While sustainable tourism was not the main source of profits originally, it became a major source of income in recent years. The restaurant was built when the women at El Yue realized the numbers of tourists and locals interested in what they were doing was increasing each year. The restaurant was built to increase the organizations economic prosperity. Along with giving El Yue additional income, the restaurant was another way to utilize all of the organization’s left over resources. The additional food that was not sold or consumed by families within the group could be sold and fed to tourists and volunteers, for example. Furthermore, it beca 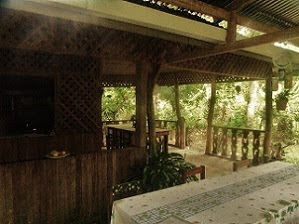 me a sustainable business. The foods were grown organically, as well as locally. Subsequently, the organization does not contribute to degradation of the environment in the sense that it does not use traditional, environmentally damaging farming practices for growth and production of its foods. The restaurant is sustainable within itself and increases incentive to travel to the farm as it slowly becomes all inclusive. Right from the start, the ladies who founded El Yue wanted to develop the organization and farm so that their resources and necessities could be obtained from local sources. Many of the products they consumed were from outside sources, so the difficulty of accessing them increased along with the cost, including hidden, indirect costs. Much of the cooking at the restaurant was done using the methane gas from the bio-digester. The pig manure was fed into the bio-digester and the methane byproduct increased the business’ ability to be sustainable. The restaurant at El Yue was not only sustainable within itself as a business that was advantageous economically, but it also had its ecological benefits reducing the farm’s waste and carbon footprint. 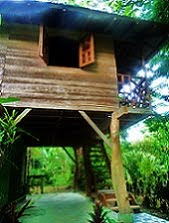 When the organization was founded, they never planned on turning their farm into a sustainable business that even tourists were drawn to. They operated on borrowed land for three years. However, then the owner wanted the land back. It created disincentive for the women in the organization. Combined with social pressure from their husbands to stay home and be housewives, they dropped out. The organization switched locations after a friend from Spain won money from a music contest and donated it to the organization. With the donation, they bought half of their current land. They grew sustainable, organic foods and with their profits bought the rest of the property. From the success of their sustainable agriculture practices their organization and business grew. In 2003, four cabins were built on-site, funded by the United Nations Development Program (UNDP) Small Donations Project. Although the cabins were originally built for the volunteers and members that needed to stay at the farm, they soon became the housing for tourists who wanted to see the sustainable business that had grown out of this woman-initiated organization. Currently, tourist groups and volunteers come from all over the world, throughout the year, to work with the community, reforestation projects, watershed protection, and other projects of El Yue. Each year there are approximately three hundred visitors per year not including volunteers.

Library
The library was also not in the original plan for El Yue. Rather, it was built when a volunteer decided to donate and give back to El Yue upon completion of their volunteer work. After departure from the farm, the 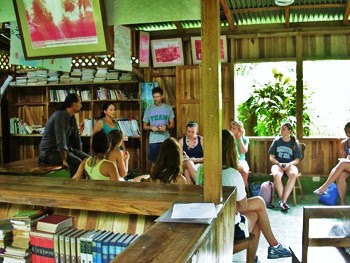 volunteer took part in a marathon. However, it was not solely a marathon; rather, the reason it was held was particularly to fund the building of the library. The farm is not just a location to gather in or a place to go for information. It is somewhere that exemplifies the community as a whole and their priorities, as well as aspirations. When we visited, we learned the history of El Yue and the challenges it faced. Not only was it a small, organic farm in the midst of numerous traditional, industrial farms, but also a women founded and run organization with limited funds and resources. However, the group was able to overcome the gender inequality despite social pressure. Also, they were able to become sustainable and independent, helping improve the environmental health and conditions, increase diversity, and even improve social conditions and education. Much of what the library represents is the education to raise awareness about sustainability and ecological issues society faces. Inside the library numerous posters are hanging, many of which have been drawn by children. These posters are both pictures and diagrams representative of issues we need to keep in mind, such as watersheds, recycling, and so forth. Education of current generations along with future generations is extremely important to improving society as a whole. Therefore, this library has implications of the impact El Yue has had on lives of people such as the volunteer whose generous donations made its construction possible and furthermore, the various children and tourists who go within its doors and have been impacted by the knowledge they acquire from within. The library has both social and ecological significance within and outside of the community.

Author: Madeleine Fahnley
Posted by Participant at 10:25 AM