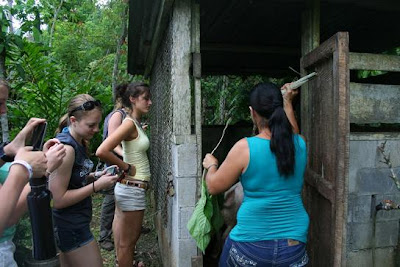 THE BIODIGESTER
At El Yue agro-ecological farm, nothing was wasted. Any item bought wasn’t put into the trash; it was either reused or recycled. Most of the food was eaten from the garden and anything left over was composted. The medicinal plants grown on the farm were used to heal injuries. Even the animals waste was used as energy source and a fertilizer. The methane produced from the manure was collected as an alternative energy source with the help of a biodigester. In the photograph, Rosa Amalia is feeding the pigs with banana leaves and other plants that she grows on the farm. Any leftover pieces that aren’t eaten are cleaned up and put into the compost. The compost decomposes the waste material and the resulting material is used as a fertilizer for all the plants. Once the waste has been produced by the pigs, the hose that you can see on the far right of the picture is turned on to flush out the manure with water in the form of a sludge mixture. She assured us that no mixing was needed, that all the solids are washed down the tube and will eventually breakdown naturally with the help of bacteria. 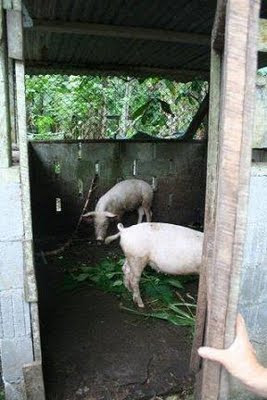 INPUT
The first step of the energy generating process would be the feeding of the two pigs shown in the image so they produce manure. Other animal waste can also be used, such as cows. However, because their manure is more fibrous due to the grass they eat, cows require a greater amount of water in order to be used as part of the biodigester. Cows require 5 gallons of water to 1 gallon of manure while, with pigs, the ratio is 1:1. Also, the more animals that produce waste, the greater amount of gas produced. The two pigs’ manure produced enough methane to power the kitchen on the farm. They also were almost done constructing a sauna that will be run entirely from the biogas. At Rosa Amalia’s home, she has 20 pigs and they have more than enough energy needed for two households. There is a wide tube in the far back corner of the pigsty where the manure is washed into the pipe that enters the plastic tank. The manure is naturally water-soluble so the buildup of solid material doesn’t occur. Once the manure sludge is run into the plastic tank, it takes about a month for the anaerobic digestion by the bacteria to produce enough methane gas for use. 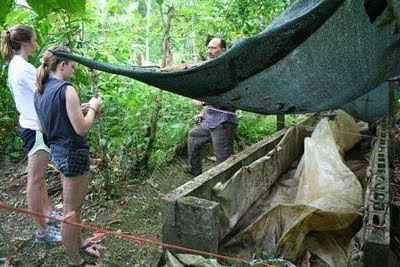 THE GAS COLLECTER
The photograph shows the biodigester not fully inflated with the methane gas. This is because only 2 days before a tree fell on the pipe for the exiting gas and released all of the methane gas. In normal cases, the sack would be blown up like balloon. The methane gas that is collected in the tank is around 20 times more potent of a greenhouse gas then carbon dioxide. Therefore, this process allows for this gas that would normally be released into the atmosphere and causing global warming to be used directly as cooking fuel or for electrical energy in a home. This simple farm-scale energy produced is a cheap alternative for more traditional countries to provide cooking fuel and lighting to their home in a sustainable way. A negative of using to using a biodigester is that the bacteria responsible for the digestion require warmer temperatures to survive making it is not as feasible in colder climates. However, the gas produced can be used to warm the tank in order to keep the bacteria alive. Another issue with this energy source is that it requires daily maintenance. Each day, manure and water need to be added to the tank and the resulting effluent needs to be emptied. 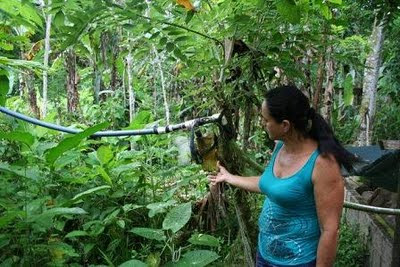 PRESSURE RELEASE
In this image, Rosa Amalia is showing the pressure release safety system of the biodigester. If too much methane gas is produced and the pressure in the tubes is enough to force the gas upward through the water in the jar, then excess gas will be released into the air to reduce the pressure. This ensures that the bag won’t explode under pressure when the methane being produced is at a higher rate than it is being used. Just slightly to the left of the pressure release system is where the pipe had to be fixed due to the tree that fell on it. The tube to right in the picture connects to the top of the tank of the biodigester and the tube to the left is the beginning of a long tube that allows the methane to reach all the way to the house. It is also connected to the future sauna they are creating. The burned biogas still produces carbon dioxide, but it is essentially a carbon neutral system if the plants that are used to feed the animals are continuously grown. The methane gas being directly produced on site is both cheaper for the resident and simultaneously reduces the amount of energy needed for the transportation of other energy sources. 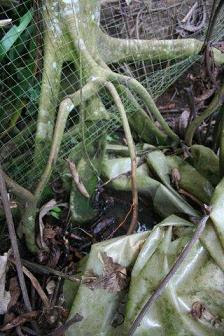 ORGANIC FERTILZER
The two effluents produced in the biodigester tank are the biogas used for energy and a nutrient rich liquid that can be used as a fertilizer. This picture shows this liquid that is produced at the end of the bag opposite where the manure sludge comes in. Rosa Amalia says she collects it with a ladle and pours on her plants. The bacteria in the biodigester break down and sterilize the waste put in, resulting in a remaining liquid that is a safe and highly effective fertilizer. When there is a lot of methane being generated, the liquid needs to be collected every day. Instead of using the chemical, toxic fertilizers produced in an industrial plant, this organic digester liquor can be used instead. With both this biodigester waste liquid and compost pile, enormous amounts of energy and money can be saved by not consuming the industrial fertilizers which use large amounts of energy and resources to produce and transport. Also, using untreated manure as a fertilizer is bad for the environment because of the diseases it can produce. This process is regenerative and environmentally sustainable. The plants used to feed the pigs are fertilized by the effluent and compost, the food waste that the pigs don’t eat is composted and the manure eventually turns in the fertilizer. 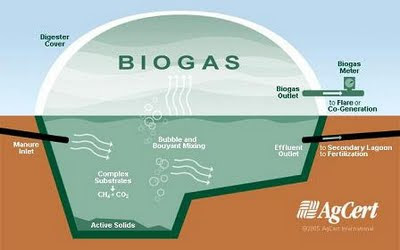 This diagram illustrates the entire process of a biodigester. The manure and water comes in on the left, the bacteria breakdowns the solid material into methane gas which rises to the top where the biogas outlet is. The biogas meter is the same as the pressure release container filled with water. The effluent outlet is the liquid organic fertilizer. The entire process is free of any external energy source; it is just taking advantage of a natural occurring process. While many rural biodigesters use animal waste as an input, in reality any organic material can be used to produce biogas, such as food waste, grass, paper, and sewage. In fact, Chiquita Fruit Company has created biodigester in Costa Rica using their solid food waste and water as the input. Their hope is that the methane produced will eventually yield enough energy to operate the plant where it is located. The benefits of using a biodigester are the replacement of depletable fossil fuels as an energy source, reducing the amount of waste and the energy used to treat the waste, drastically lowering the methane released into the atmosphere, eliminating the need for industrial fertilizers, and also reducing the runoff into water systems from animal’s pens. These are significant benefits that can help the environment with such a simple process. For farms or households that can manage the daily care of the biodigester and utilize large amount of fertilizer, a biodigester is a feasible sustainable energy solution.
Diagram Source: http://www.profitablegreensolutions.com/z/greentravelpartners/faq5.html