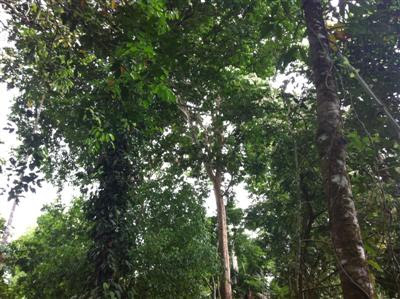 During the inaugural short-term “Maymester” 2011 voyage of the Semester at Sea study abroad program, the Foundations of Sustainability class, led by Dr. Miguel Karian, visited El Yüe. We, the students, learned about the farm community and the sustainable practices of the community members. The community also had a Peace Corps volunteer there to assist in cultivating a sustainable Eco-agricultural community.
El Yüe is a farm and forest where farmed and wild plants and animals grow in harmony. The women owners work and live in the Carbón 1 community growing crops and medicinal plants in an organically in order to conserve natural resources. They also help the environment by guarding the forest from deforestation and illegal hunting, through environmental education, and by reforesting. Many of the trees are endangered and the property borders the Carbón River. 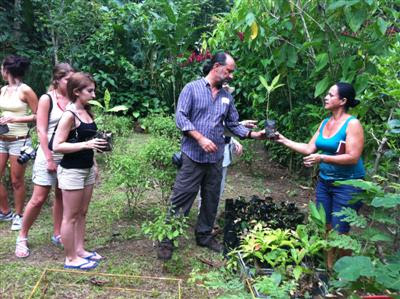 Students and the professor lined up to pick up saplings to plant from a tree nursery. The nursery is a box of soil where tree seeds are planted temporarily to help them grow into saplings. We were assisted by Rosa, who works in the community and was one of the founding members. Then we made our way deeper into the forest, seeing a variety of native flora and fauna. We stopped walking at an embankment beside a river as a light drizzle began to fall. This is where we would plant our saplings. We chose this area because, hopefully, as the trees grow, their roots will hold firm in the soil to prevent erosion of the land into the river. Trees are an integral part of the ecosystem for many reasons. Like other plants, their roots hold the soil together to prevent erosion. Erosion can be problematic when land breaks and gets into the water, and whatever was in the soil can end up effecting water quality. Pesticides from crop fields (such as the nearby Chiquita banana plantation) can end up poisoning the water for plants, animals, and humans dependent on the Rio Carbón (Carbon River). Fertilizers can also get in the water, causing a process called eutrophication to occur. Eutrophication is a process where chemicals from the fertilizer get in the water, causing an algael bloom. When there is too much algae, it can drown out other life. The coral reefs for which Costa Rica is known have been suffering because of this. 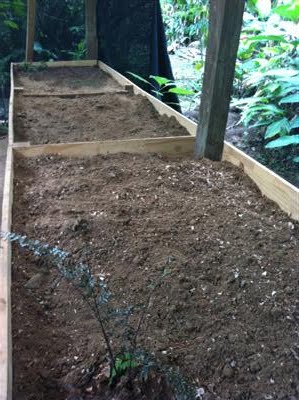 Additionally, trees absorb carbon dioxide through photosynthesis. So, as more trees are cut down, less carbon dioxide is absorbed, contributing to climate change. As the climate changes, weather becomes more unpredictable, harming the ecosystem, and the cycle continues. This is problematic for both the environment and people. In this area of Costa Rica, for example, it used to rain during the entire month of May, as our host explained. The weather used to be much more predictable and rain more prevalent, helping the plant and wildlife grow. Because of the lack of rain, the ground dries, and when it finally does rain the community can experience landslides and flooding. They believe that this weather issue is caused by climate change, as many areas across the globe are suffering from unpredictable and extreme weather. This area has also historically suffered from a lot of deforestation, which contributes to erosion and negatively effects water quality. 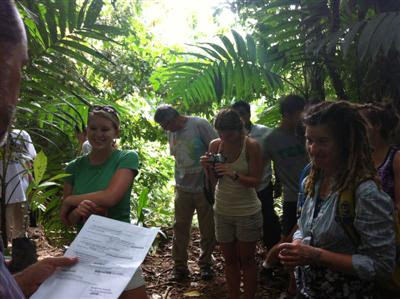 The students had arrived via a ship, on which their Semester at Sea program was located. The ship is LEED certified and goes to many lengths to conserve water, fuel, and other resources. However, it still has a significant carbon footprint (wake?) and each student had impacted the environment by coming on the ship, as the floating campus goes around to many countries in Central America. Dr. Karian had worked out an equation using averages to determine how long it would take for the trees to off-set our carbon impact from traveling. If the trees are to absorb the same amount of carbon over the next several years that is the average for a tree over its lifetime, it will take 3-4 years for the trees to off-set our impact from the trip. The professor gave each student a piece of 100% post-consumer recycled paper to write on. Each of us was to write our hopes for a sustainable future, and to plant it with the saplings. As the trees grow, our hopes will grow up with them. The group shoveled out holes evenly spaced along the side of a river for the saplings that they had selected earlier. 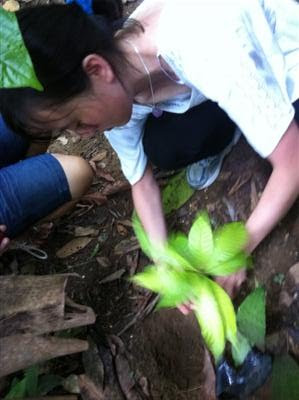 For many students this was their first time in Costa Rica, and only a handful of us spoke the Spanish language that is commonly spoke by the rural community members. Still, we were able to start to understand both the positive and negative effects of differing agricultural practices in Costa Rica. We learned about the struggles and history of the rural agro-ecological community and their relationship to their economy, environment, equity and education. We fought off surprisingly fierce ants that came up out of the ground like zombies. We had the rare opportunity to get first-hand experience, and to give a little service back. It might seem like planting a sapling that will take years to offset our carbon impact for this brief trip is a drop in the bucket. In its own way, this appearance makes it even better suited to represent the movement towards sustainability. The road towards a greener world is constantly daunting because of human capacity for destruction. For example, globally more trees were cut down in the time it takes to read this post than the 19 or so trees that we planted. El Yüe is tiny by comparison to other farms, but the property is an important sustainable alternative for the local community. If we are to get anywhere to move towards a more sustainable future, we must continue to take whatever steps we can. Even if the first one is just to plant a single tree.


AUTHOR: Kristin Hugo
Posted by Participant at 10:04 AM