AMURECI is an association of 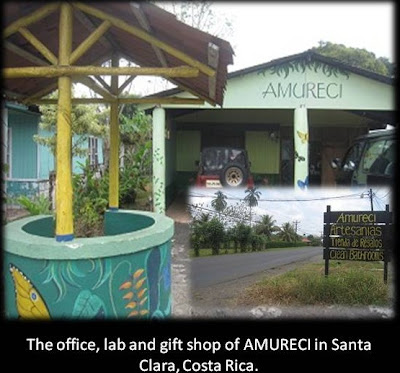 incredibly creative women dedicated to the production of unique handcrafted art and souvenirs made from recycled materials from the community. Located right off the main highway towards Volcano Arenal in the small town of Santa Clara, it has become a gift shop for passing tourists as well as a service-learning destination for world volunteers. Its mission is three-fold: 1) Support the social, economic and spiritual growth of women, 2) Pomote the economic development of Santa Clara and surrounding areas and 3) Inspire environmental stewardship.

The birth of AMURECI happened one afternoon, about 10 years ago, when four beloved young housewives met for their usual “coffee time” to engage in a daily conversation about their lives. Two of the women had just attended a women’s leadership workshop held by a local cooperative. All participants were required to create and present a “project” that they would like to implement in the community. The project envisioned involved recycling paper and selling recycled paper products. The idea was mentioned and the others loved the it. From there, a series of community meetings were organized with local women to make their dream a reality. 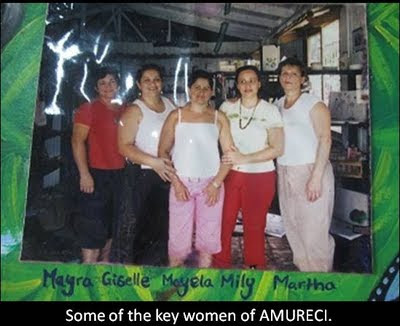 Established in February of 2001, AMURECI was the first women’s group in Santa Clara to receive a loan from Banco Popular, a Costa Rican bank, to start a microenterprise. Like other female-led grassroots organizations in Costa Rica, getting their business off the ground involved a lot of patience, teamwork and most of all faith. The women had to collect paper and cardboard waste in the community on foot. They attended workshops on how to make recycled paper and art. They identified and capitalized on the strengths and talents of each individual woman in the group. Some were business savvy, while others were creative artists. They worked diligently to coordinate their efforts to ensure all their bases were covered. In addition, the women had to remain positive and strong amid widespread skepticism that their project would succeed. For a long time, even their husbands thought they were  only getting together regularly to share gossip.  Fortunately, despite the doubts, the women were always permitted to meet and work towards building their dream. The initial community meetings yielded 12 members but gradually fell to 7 as most women couldn’t maintain the support of their husbands or had a hard time believing that a recycled paper and art business could become successful. 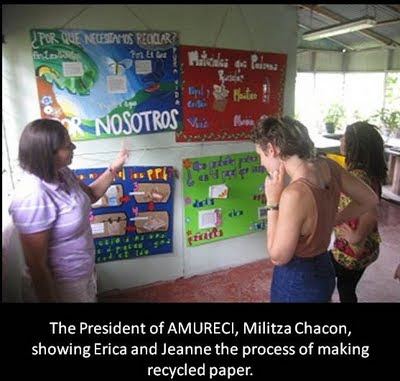 Slowly but surely though, their dream business started to become a reality. Through partnerships formed with other local organizations, AMURECI began receiving volunteers who provided them with English classes and training to work with tourists. The local municipality delivered technological support while the local university provided workshops on self-esteem. The National Apprenticeship Institute (Instituto Nacional de Aprendizaje, INA) offered painting and customer service classes. Additional support was given by the Ministry of Agriculture as part of it's gender program.

As their business expanded, the women found themselves juggling dual roles as full-time moms and housewife's, and entrepreneurs. Unfamiliar and worried about how this situation, the women sought the advice of a local social worker to determine the best way to care for their children in the face of their rapidly changing roles.  One solution was for the women to help each other with raising their kids. Interestingly enough, the children have grown up to become more independent than most Costa Rican kids. 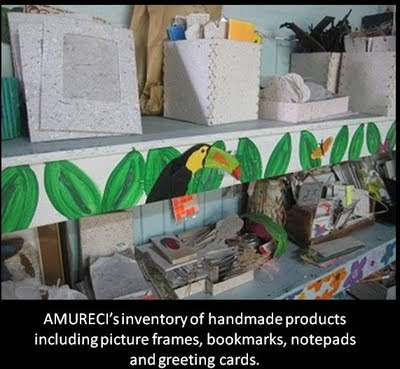 Today, ten years later, the 7 women in the association now have a spacious colorful facility off the main road in Santa Clara where their goods are made and sold. Recycled materials, specifically paper, newspapers, magazines and cardboard are supplied by another local women’s group called the “4 R’s” in charge of collecting and classifying the community’s solid waste. Combining shreds of paper with dried banana leaves and water, the women gradually transform this mix into recycled paper to create a variety of products including journals, bookmarks, folders, notebooks, greeting cards and mobiles. Using seeds that drop from the trees of the nearby rainforest, they also make simple, earthy jewelry from earrings to necklaces. Their handmade goods can be found at various tourist spots in the La Fortuna and Poas Volcano regions, as well as in nearby communities.

AMURECI also has a program called “Paper Adventures” that are comprised of fun, educational paper making workshops for children and adults to teach the community and tourists creative ways to recycle. Paper Adventures is a two hour session for groups or individuals of any age for $16 U.S. per person. The sessions include a step by step process on how the women make paper, a take-home finished product that can be decorated, and delicious homemade snacks with locally grown coffee. Hours of operation are 8:30 am to 5:00 pm, Monday through Friday.

Reflecting back on the formative years of AMURECI, Militza Chacon, President of the Association, claims “the women have grown tremendously…before we were just housewives wondering what we could do to bring more meaning into our lives and the lives of other women. We have not only made a positive impact , but we have also become professional businesswomen along the way.”  Her colleague, Martha Carvajal, the AMUREI Treasurer, adds that “we feel like professionals in what we do because of all of the training we have received and the experience we have gained throughout the years..” 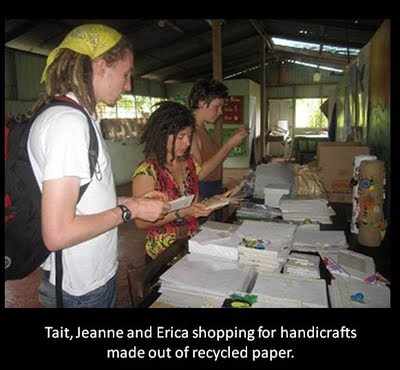 The women of AMURECI are not only the recipients of training workshops, but have also become leaders as they organize and facilitate workshops for others. Groups of women in Costa Rica as far north as Guanacaste have come to AMURECI in search of inspiration, encouragement and support. These women, like them back in the day, are housewives hoping to build their own microenterprise in their communities someday.  An incredible opportunity key leaders of the Association received was an all expense paid trip to a business management conference organized by the Instituto de Andalucia in Sevilla, Spain. It was the first time the women had traveled overseas and become part of a global network of professional businesswomen. As one of 345 organizations represented, the women participated in 2 weeks worth of workshops that included a fair featuring the work of all the organizations. Proudly displayed on the wall of their art lab is a poster-size sign displaying AMURECI’s booth number 148, which had appeared at the fair and which now stands as a daily reminder of one of their major accomplishments.

In the last few years, AMURECI has had difficulty securing long-term, stable volunteer support. In the past, they have been granted volunteers by international organizations such as “Cross Cultural Solutions and local groups like “Juventud de Agricultura de Zona Norte” (JAZON) and Project ASIS, an organization focused on conservation and wildlife. Most of the volunteers they have received have been short-term, but ideally they would like volunteers to stay months at a time so their visits can be more productive. 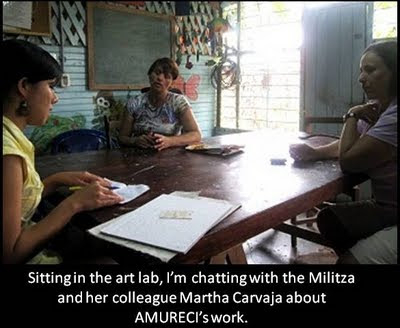 Furthermore, as the world economy has suffered, so has AMURECI. The last few years have seen less tourists and therefore less business. Struggling to pay the debt they still owe to Banco Popular, the women have adopted side jobs such as catering. They now cook large orders of food for special events in the community and occasionally prepare lunches and dinners for local and international tourists stopping in their community for a homemade meal.  These days, the women of AMURECI find themselves with more leisure time on their hands than they would actually like. The hardest work has been done. They had an idea. Fulfilled it. And made a difference in the community. They are currently working hard to pay off their debt and expand their business. They would like to continually grow and provide new forms of employment opportunities to other women.

The next step: Reviving their lost afternoon coffee dates perhaps? Since the early years some of the women have moved to different homes and now live further apart from one another. However, they hope to revive this once-cherished tradition soon. This time, however, they hope to have them embody a greater spiritual focus and possibly have each meeting revolve around a specific theme, such as gender or leadership.  Anything that truly celebrates the strength and beauty of women.


NOTE: A directed study comparative analysis paper with further details on this and similar sites is available here: Achieving Sustainable Development Through Women's Entrepreneurship: A Comparative Study of Social Microenterprises in Costa Rica and Nicaragua.
Posted by Participant at 12:13 PM