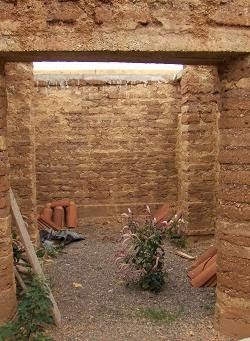 Hope for the Future
Mujeres Solares de Totogalpa is a fantastic example of a group focused on sustainability and the empowerment of women. Most of the work that is going into the project is based on the hope that the center will be a success and provide jobs for future generations. 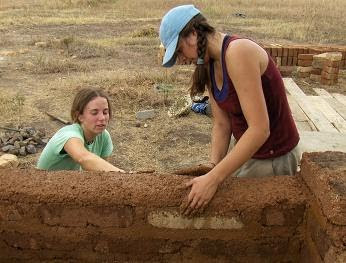 Building a Composting Toilet with Adobe
This was our main volunteer project for Mujeres Solares. It is a composting toilet located behind the center and became a priority for the group when they learned that they were losing access to the latrine that they currently use across the street. It is located behind the Center at the back of the property. Pictured here are Kelly Wassell (on left) and Claire Wingerd applying mortar between the layers of adobe. The corner pieces (seen at far right) are placed first to ensure that the layer of adobe is plumb before the rest of the blocks are put on. With our help the group was able to get about a meter of wall completed in one morning! 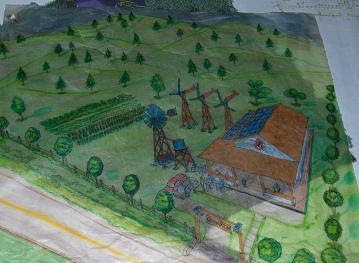 Original Dream of Solar Women's Center
This is the original plan created by one of the children of the members of Mujeres Solares. The dream and the plans have changed a bit, and even more now that they are actually constructing the buildings. But we thought this one represented the center the best. 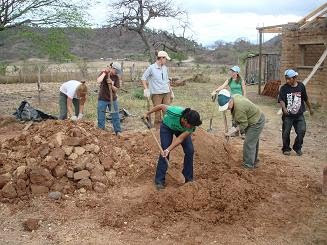 'Mujeres Solares' Adobe Construction
In this picture, we are preparing mortar to help build an adobe bathroom for Solares Mujueres. On the left, we are smashing old (cracked) adobe bricks to re-use them. Then, we make a small pile with the adobe dirt and create a crater (hole) in the middle. After that, we mixed it with water. We were able to tell when it became mortar as it turned it a thick muddy substance. Finally, it was ready to glue the adobe bricks together to make a bathroom. It might not look very hard, but it was strenuous labor. We had fun while making it too! 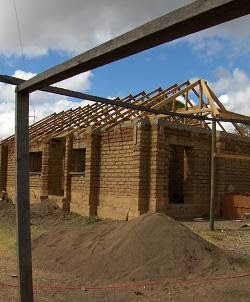 Nearly-finished Solar Women's Center
This picture was taken from the side facing the InterAmerican Highway, in front of the tool shed. The building utilizes a raised foundation of concrete to keep the rain from eating away the adobe, and the group found it difficult to find a legal source for the lumber used to hold up locally-fired tile roof. The pile of material in the foreground is waiting to be used for the stucco finish.


Author: Nicole Lynch
Posted by Earth Education International at 11:28 AM