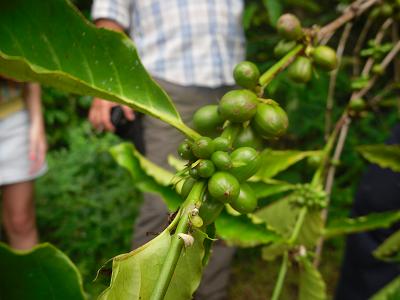 Arabica and Robusta Coffee
This picture shows the coffee beans that are not native to the lands which we were in. In Panama, and specifically this family- owned coffee farm, the normal Panamanian coffee beans were small in size. Upon realizing that with the large size of the bean having more flavor and caffeine content, hence, ’robust,’ and the possibility to make more money, they began importing ‘Robusta Beans’ (as shown in the photo) of larger size. “The robusta plant has a greater crop yield than that of Coffea Arabica [even]. As it is less susceptible to pests and disease, robusta needs much less herbicide and pesticide than Arabica” (wiki). Robusta beans are native to lands in Africa and other places with a wet climate such as this area of Panama. There are several differences in leaf size, flavor, and way of growing between the Arabica and Robusta coffee plants. For example, “the Arabica coffee plant is self-pollinating, whereas the Robusta coffee plant depends on cross pollination” (coffeeresearch.org). As our guide was saying, the Robusta plants need certain forms of cross pollination to re-pollinate. While we were here, he pointed out a specific bird that is the main ‘cross- pollinator’ for these plants. By sitting on the plants and taking pollen and nectar from the sweet smelling white flowers the plants produce early in the season and flying around to other plants, these birds naturally pollinate the other plants. Insects of course also serve the same purpose in cross- pollinating. Because this is a shade coffee farm, the idea of the protective canopy of trees offers not only protection of the plants, but also can serve as a home to many animals such as insects and butterflies that will pollinate these coffee plants. Focusing solely on birds, shade coffee fields shelter up to two-thirds of the bird species found in natural pristine forests in the same geographic areas (shadecoffee.org). 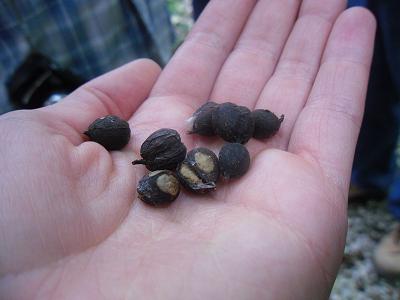 Perturbations
This picture shows coffee beans from a plant that was not able to be harvested. The normal harvesting season for coffee beans in Panama is between October and December. However, these beans came from a tree that was infested with ants. Pests are always a problem for many farmers, and when it comes to organic farming, the use of unnatural pesticides is not practiced. With small scale farms, these families need all of the trees and plants they can get, showing that there is a need for ways to protect pests. With the continuance of environmental perturbations natural remedies have been found to keep away these pests. As our tour guide was telling us, the natural remedies they use for these problems come from another plant that they had growing near the trees. It was a type of lemony- smelling plant that repelled ants in other forms. It could not simply be planted next to a coffee tree to keep it free of ants and pests however. It first had to be boiled with water and made into a liquid. After this it could then be directly applied to the coffee plant as a natural repellent. This had to be done the year prior to harvesting the particular plant. 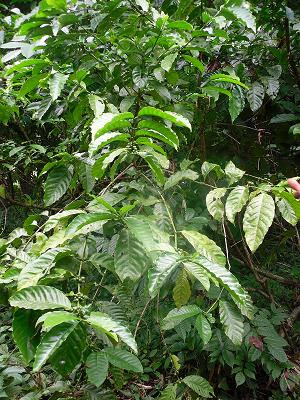 Shade Coffee Environment
This photo shows the environment of the coffee plants. The use of land is very important to most local farmers. Shade grown coffee must be produced under a canopy of trees for it to yield its most beans to harvest. By being in the right location, this small- scale organic shade coffee farm is in the perfect, natural, already existing habitat. The environment for this area is also rainy, which it actually started to rain a little while we were there. Although their normal harvest season is from October to December, if it has been really rainy they may even harvest some plants as late as January. As our guide said, this area is the rainiest in the whole country. Although this can be seen as an environmental perturbation, these farmers work with the environment to produce sustainable crops. However, the reason that they chose to have a shade coffee farm may be for this very reason. The canopies of trees in which shade coffee farms are located help protect the trees from sun and more importantly, rain. As we also have seen, this shared as a home for their horses as well. Along with being a natural forest, creating a perfect habitat for the coffee plants, it was also the home for some of their livestock. “Among the many benefits of using shade-grown coffee production methods, in contrast to sun-grown coffee, are that it provides food and shelter for songbirds, as well as habitat for numerous other species of animals and plants” (shadecoffee.org). 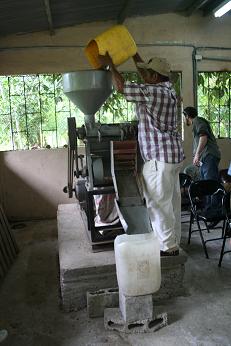 Small- Scale Processing Plant
After harvesting and drying the coffee beans, they are able to be taken to this small processing plant. There, the beans are put into this machine that shells them and empties them into a bucket. When relating to ecological footprints, the tool for measuring and analyzing human natural resource consumption, this coffee plant puts out close to what it puts in. After the coffee beans are shelled, the waste is separated by a blast of air from a fan that sends the shells through a several foot long piece of PVC piping directly back to the environment outside.  It is then used as feed for the chickens and livestock that live in the back. The chickens then create environmentally friendly compost that can be used for growing soil for the coffee plants on the farm. The ecology of this small- scale farm is indefinitely ecologically circular, meaning that what all of the products in the production can be re-used and renewed to make more of the same thing. The natural compost thrives in the natural shade environment of the coffee plants. 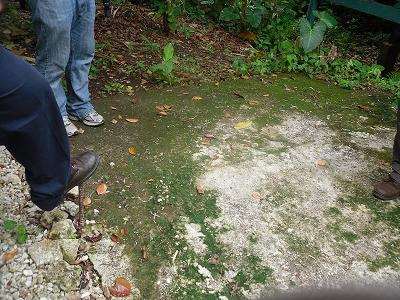 Greenhouse
Right next to the small house on this coffee farm is a slab of concrete with pieces of rebar sticking out of the ground. Asking if this was actually used for something, we received an explanation of another ecologically sustainable component of the farm. We learned that this place is used to set up a greenhouse for production. After the coffee beans are harvested, they must then somehow be dried. Instead of using forms of electricity, these people use the natural heat and energy from the sun, and the technology of the greenhouse to dry out the newly harvested coffee beans. It was interesting to see that the only source of electricity I saw on this Faculty Directed Practicum was for the small scale processing plant to power the small machine used to shell the beans. When comparing this ecologically friendly system to large scale processing plants in respect to electricity, this farm that we had visited has much less of an ecological footprint. Along these lines, I asked our guide if they have ever considered s type of solar power to dry out the beans because maybe they could do more at once, which could increase the production and human capital. He told me that in the future that could become a possible opportunity for this farm and many others around it, especially if they could collaborate with other farmers as part of this organization has already. It would be very interesting to re- visit this site and see their progress down the road in a few years. 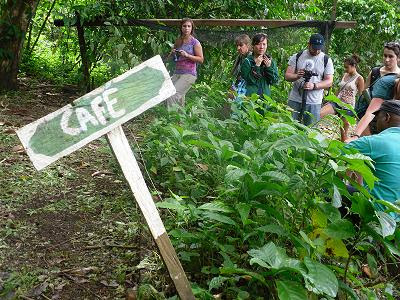 Cafe Seedlings
This photo shows the small coffee, ‘café,’ plants that are growing the shade forest as well. This farm uses their own seeds and seedlings from existing trees to plant these new ones in this small nursery area and then transplant to the farm in the future. It takes 3 to 4 years for these Robusta beans to yield beans, depending on the size of the plant. This reduces the costs and shipping associated with importing more plants, like they had done with the original Robusta coffee plants. I was interested in how you actually grow, or start a coffee plant and what it takes for this to happen. I asked our guide on the way back to the bus and he told me a few things that you need. First, he said that the soil must be moist, but cannot be too wet. This, as stated before can become a problem in this area because it is the rainiest area in Panama. It takes a lot of care for a seed to sprout into a seedling. After about 4 months, the seedling will begin producing leaves. Then, after about 5 months after, the seedling will begin to look like an actual coffee plant. But as we stated earlier, it takes about about 3 to 4 years for it to actually begin yielding beans. They are then replanted from this small area.

AUTHOR: Amanda Galioto
Semester at Sea, Maymester 2011
Posted by Participant at 10:50 AM