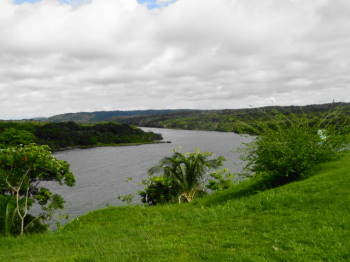 Protected Area
The San Lorenzo Protected Area is located at the northwestern entrance to the Panama Canal and is currently part of the Mesoamerican Corridor of protected areas extending from the Yucatan of Mexico to Panama. The Mesoamerican corridor is designed to join protected areas throughout Central America by ecological corridors, or land bridges, so that the habitat necessary for migration of the region’s wildlife can be protected. The protected area includes features such as Fort San Lorenzo, Fort Sherman, and about 12,000 Ha. of additional land for biodiversity. In addition, the area provides scenic views of the river. The Caribbean Sea, Limón Bay, and Chagres River are major nearby waterways. The Chagres is the largest river flowing through the San Lorenzo Protected Area, separating the area into a northeastern and southeastern portion. Our class got a taste of the vegetation and surrounding landscape while driving through the protected area to get to Fort San Lorenzo. 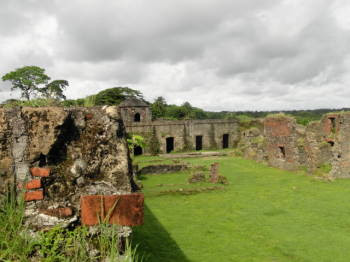 Fort San Lorenzo
In 1534, Philip II of Spain foresaw the need for a fort at the mouth of the Chagres River to protect Spain’s gold route over the isthmus. In 1597, the Spanish initiated a water level battery and later built a fort called San Lorenzo. Cannons were fitted in 1626. Some facts about the fort are that it was built 25 meters above sea level on a cliff overlooking the mouth of the Chagres River. Also, the walls on the landward side are surrounded by a 10 meter wide dry moat and drawbridge. Features within San Lorenzo are an interior parade ground and several enclosed cells designed for prisoners and the storage of equipment and supplies. In 1748, the Spanish abandoned the Chagres route over the isthmus, favoring travel around the tip of South America at Cape Horn. Therefore, during the 19th Century the fort was used as a prison. In 1980, United Nations Educational, Scientific and Cultural Organization, declared Fort San Lorenzo and its surrounding 5 Ha. as a World Heritage site. Walking around you can sense the history and importance of the site. In addition, visitors who are not aware of its significance can read the narration boards that are abundant and give a quick easy description. 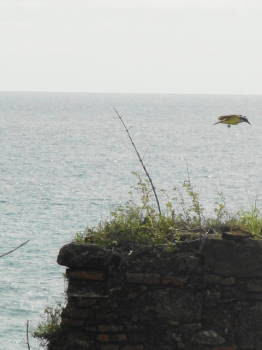 Wildlife
The San Lorenzo Protected Area has at least 81 species of mammals, or 35 percent of all the mammals found in Panama. Bats are the most common group with 41 species, followed by rodents with 17, and carnivores with 9. Some examples include Howler monkeys, Slaty-tailed trogon, Toucan, and Leaf Cutter Ants. Upon our arrival to Fort San Lorenzo we found a trail of Leaf Cutter Ants carrying leaves more than five times their size. I think I can speak for everyone when I say that watching them and the way the colony works together was fascinating. Panama has about 930 known species of birds of which 75 percent are residents and 14 percent are regular migrants. Reptile and amphibians are also abundant with 127 species of snakes, 81 lizards and iguanas, 15 marine and freshwater turtles, 3 worm lizards, a crocodile, and a caiman. With such a wide variety of organisms and biodiversity, this place has become attraction for ecotourism. 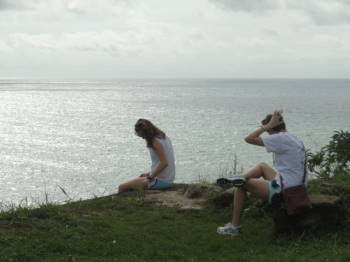 Ecotourism and Conservation
Environmentally speaking, previous activities including military activities, the impacts of canal operations on surrounding waters, the threat of inappropriate development, poaching, and the unauthorized use or exploitation of natural resources have taken a toll on the San Lorenzo Area. However, since these activities are no longer allowed because the land is protected, it has become a popular destination for ecotourism. Visitors enjoy the high faunal and floral biodiversity, activities such as hiking, kayaking, birdwatching, crocodile photographing safaris, game fishing, scuba diving, and snorkeling. There are future plans to use the grounds on Fort Sherman for an interpretative center highlighting its historical and cultural past. In addition, there are plans to develop a butterfly and botanical garden. My class enjoyed the scenic views of the river and exploring Fort San Lorenzo. 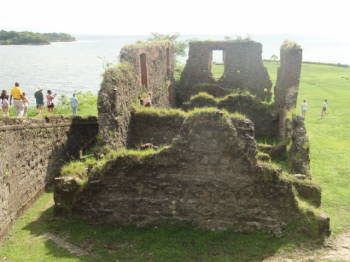 Habitat
The San Lorenzo Protected Area has three ecological life zones: tropical moist forest, tropical wet forest and tropical premontane wet forest. This land also contains three life zones, 12 vegetation types, and at least 500 species of higher plants, about 5 percent of the total recorded for the country. The high diversity in the San Lorenzo Protected Area can partly be attributed to its variable topography, different vegetation types, and the proximity of large undisturbed tracts of forest to the west. Another critical factor is the relatively large size and limited human disturbance. The San Lorenzo Area is a important part of the inter-oceanic corridor across the isthmus, and of the Caribbean coastal corridor. Future research will add new species to the list and also help determine the impact of humans on its environment. 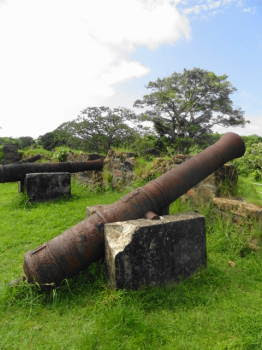 Military
Starting in 1943, Fort Sherman was used as a training site for the Pacific Theater because of its rugged terrain, notably the Piña Range. In 1909, the U.S. Secretary of War requested plans for the defense of the Panama Canal. The plans included building and maintaining Fort Sherman, named in honor of General William Tecumseh Sherman, a renowned Civil War commander. The conservation of resources in the canal watershed involves several issues: damage and hazards from past military activities, the impact of canal operations on surrounding waters and shorelines, the protection of archaeological and historic sites, the threat of inappropriate development, and the unauthorized use of natural resources including lax law enforcement. Upon our visit to San Lorenzo Fort, it was obvious to see that it had military roots, especially because of the canons and trenches that were built along the exterior.