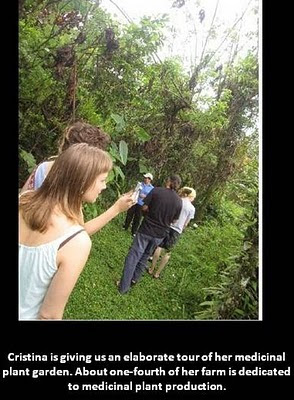 Situated at the base of Costa Rica’s most active volcano, La Arenal, lies a lush green organic farm that belongs to Cristina Berrocal and her family. For 25 years, Cristina and her husband have managed this 5 hectare estate encompassing a wide variety of fruits and vegetables as well as cows, chickens and worm compost. The couple also own an impressive farm- scale biodigestor that converts cow manure into a reliable source of energy for their kitchen stove. However, the most striking feature of the farm is the presence of hundreds of medicinal plant species, from the well known ginger and lemon grass to the not so common bushy lippia plant used to alleviate sinuses and stomachaches. 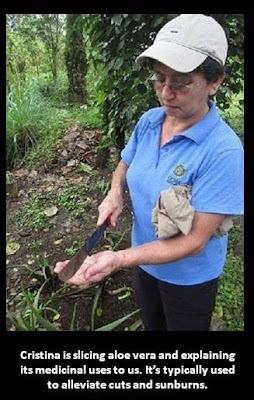 Cristina is one of eleven active members of a successful women’s cooperative called “Grupo Ecological de Mujeres de Abanico (GEMA).” GEMA is a women’s medicinal plant cooperative that cultivates, processes and sells 29 different types of organic herbs in the form of teas, spices and natural products like shampoo. Fifteen years ago, Cristina was approached by the cooperative and invited to become a member. Since then, she has reserved one-fourth of her farm for the organic cultivation of medicinal plants.

The roots of GEMA reach back to 1995, when a group of women in the small town outside of La Fortuna called Abanico got together in search of a sustainable income-generating project that would benefit the entire community. With the help of a Peace Corps volunteer, they assembled and carefully assessed the needs, strengths and interests of the group. One of the women presented the idea of growing medicinal plants and the rest were on board with it. Beginning with 17 women, the group was supported by a non-governmental organization called ANDAR that provided the start-up seeds as well as the preliminary training in growing medicinal plants. The NGO also helped the women establish business relationships with big national tea companies like ManzaTe and Mondaisa. For the fi 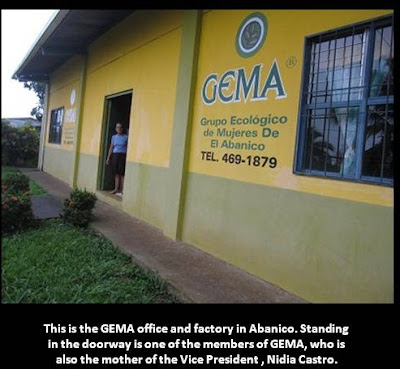 rst ten years, ANDAR acted as an intermediary, purchasing the herbs from GEMA and then selling them to the companies at a higher price. Realizing that they could be make a bigger profit by selling directly to the companies, the cooperative finally eliminated ANDAR as the middle-man five years ago.


Today, GEMA is comprised of 10 women and 1 man, all of whom are farmers with their own plots of land. Each member is responsible for cultivating, harvesting and drying their herbs. Once dried, they are transported to the processing facility/office in Abanico where the herbs are processed and packaged into small plastic bags or canisters. GEMA opened up their factory in 2003 through funds from Fundecooperacion para el Desarrollo Sostenible, a Costa Rican foundation that supports environmental and sustainable development projects. The facility provides ample space for their office, meeting room, packing supplies, machines and educational garden. What is most fascinating about this particular project is that it’s female-dominated. In a highly macho society, women, especially the wives of farmers, are relegated to the home where they are expected to complete household chores and care for the children. While some of these women faced immense challenges by their husbands in participating in the project, most of the women had cleverly secured a good level of lasting support. Cristina and Nidia Castro, the Vice President of GEMA were some of the most lucky ones. Women who lacked spousal support were unable to convince their husbands to give them a portion of the farm for medicinal plants. As a result, many of the women in the initial group of 17 members were forced to drop out, leaving behind the 10 women that are in the cooperative at the moment.

Furthermore, when the project was first proposed in 1995, nearly all of the husbands thought that growing organic medicinal plants was a silly and naive idea. They were highly skeptical of organic farming methods and had great difficulty believing that it would yield favorable results. Within just the first few months of planting, however, the husbands witnessed first-hand the wealth of benefits provided by organic gardening and were so sold on the idea that they decided to convert their entire chemical-filled farms to organic. 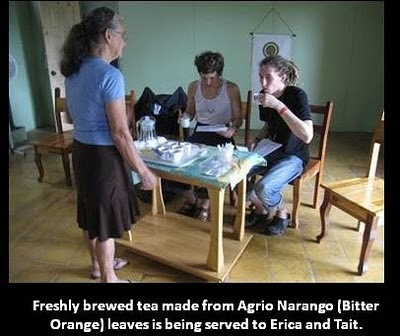 Because of GEMA, not only did these women become key contributors to the family income, but also achieved a significant degree of gender equality in their household. Like many women of her time, Cristina received a K-6 education and never had the opportunity to grow beyond her role as a housewife and mother. According to her, GEMA gave her a space to bond with other like-minded women as well as additional educational opportunities through numerous capacitation workshops on organic farming, medicinal plant properties, making medicinal plant products and business entrepreneurship skills. Her expanded role in the family has also enabled her daughter and granddaughter to take on active roles in the community and become advocates of sustainable business practices. Her oldest daughter and her husband are the proud owners of the first Eco-l 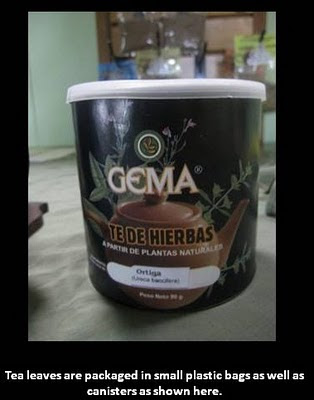 odge in La Fortuna. Her oldest granddaughter is currently pursuing environmental studies at a local university. In light of all these successes, it seems that female business entrepreneurs can be major catalysts for social change in their respective communities. The full cooperation of women alongside men in society especially in the area of sustainable development has significant implications that will be furthered examined as this case study is continually compared to other similar women’s groups in Costa Rica.

NOTE: A directed study comparative analysis paper with further details on this and similar sites is also available.  See: Achieving Sustainable Development Through Women's Entrepreneurship: A Comparative Study of Social Microenterprises in Costa Rica and Nicaragua.
Posted by Participant at 9:18 PM