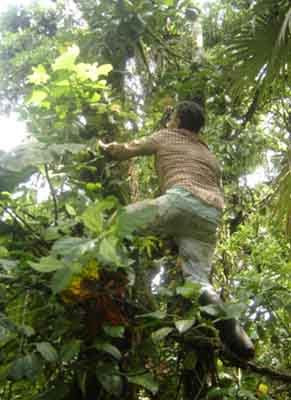 Collecting Orchids
We collected various species of orchids throughout the nature reserve surrounding the biological field station. Along the trails, many of the orchids collected were found in fallen trees or on the ground. Here, Hugo, a university manager of the reserve, is collecting a unique species of orchid found higher up on a tree trunk. The orchids were put into large plastic garbage bags to transport back to the orchid garden. During the collection of the orchids, decomposing tree trunks surrounded by numerous dead vines were chopped up with a machete to be used as mounting material for the collected orchids. 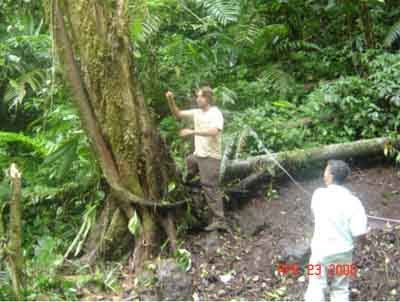 Setting up the wire grid system
The first step in setting up the orchid garden was to select a viable area between 4 trees and to clear the area of brush and decomposing vegetation. The area selected was beside a trail in between the field station and the micro-hydro power plant. Once cleared, the area was ready to set up a wire grid system which would be used to hang orchids collected from the rainforest. The wires were hung between 4 large trees at 120cm above ground level. Once the main wire framing was completed, wire rows were placed every 60cm. This provided adequate space to walk through the rows and for the continued collection of newly found orchid species. 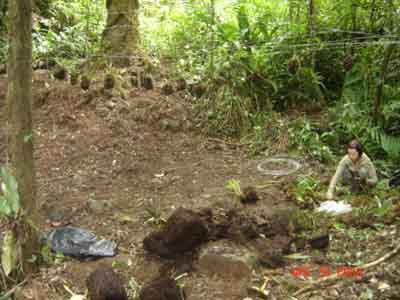