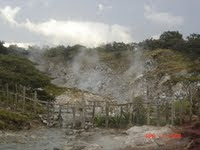 Natural Steam
Geothermal energy is a form of renewable energy derived from the natural heat of the earth. This heat is brought to the surface by thermal conduction and by intrusion into the earth's crust of molten magma coming from great depths. As groundwater is heated, geothermal energy is produced in the form of hot water and steam. High temperature reservoirs greater than 150 degrees C are ideal for commercial production of electricity. This picture is taken by the plant which shows the hot water and steam coming through the Earth´s surface. This is the type of steam that would be used for geothermal energy. 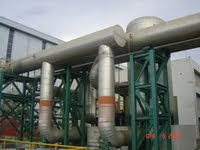 Miravalles I
This is the first geothermal plant installed: Miravalles I. It employes single flash plant Toshiba technology that was bought from the Japanese. The construction of the plant started March 2, 1994 and it took two years to finish. The unit requires 435 tons of vapors per hour to produce 55 MW, but at it´s full capacity it is able to generate 60 MW. This picture shows the first section of the process. The tubing shown is for bringing the vapor from the reserviors to the seperator & then to the turbine. Afterward, the recondensed vapor is sent to the cooling towers. 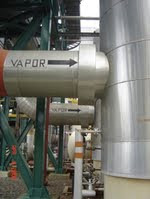 Miravalles II
This is the vapor input for the second unit installed: Miravalles II. This more modern technology was manufactured by Ansaldo, an Italian firm. Construction was started on August 13, 1998. This plant also required two years to complete construction, but the production was backed up for two more years due to problems with the new technology. This plant produces the same as Miravalles I: 55 MW. This picture shows the flow of the vapor that is extracted from the reservior into the vapor seperator. The vapor seperator then seperates the gas from the water under pressure and then transports it to the turbine to generate energy. 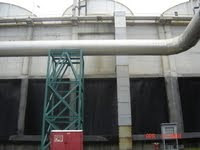 Control Room
This picture shows the control room which is inside the same building as the turbines of Miravalles I and II. The other two plants are located in different areas nearby. From this room, ICE is able to control and monitor all of the Miravalles power plants except Miravalles III. Miravalles III is foreign owned and so it is monitored by those companies. ICE sells Miravalles III the steam and buys back their generated electricity. The other three geothermal plants employ about 80 local workers who control, monitor and maintain the plants. If anything irregular is happening at one of the three plants, emergency shutdown valves can be controlled from this control room. 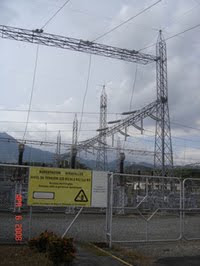 Miravalles Power Grid
This is the Miravalles power grid to which all the geothermal power plants are connected. The power from this grid first goes to the Arenal area, and then on to San Jose through the ¨Sistema Nacional Interconectado¨. Currently, Miravalles provides enough electricity to power the entire province of Guanacaste. All of the Miravalles plants together generate a total of 142.5 MW, providing between 10 to 13 percent of Costa Rica’s total electricity. This is a great clean renewable energy source for Costa Rica, but the reservoirs in Miravalles are only thought to last about 20 years. With ICE’s good care and maintenance it is hoped that the reservoirs will last up to 26 years. 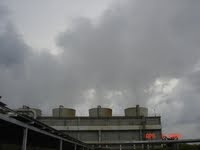 Excess Steam
These are the cooling towers where excess steam is released into the atmosphere after the energy has been produced by drving the turbines.


Author: Tanya Almada
Posted by Earth Education International at 9:41 AM