Ronald Shows Us How Hydropower Works
In the picture, Ronald is walking us through the touch screen computer system that controls the turbine that is shut off. He didn't want to mess around with the functioning turbine... The entire system can be turned off by simply pressing 'stop' on the screen. One can see at what capacity the turbine is functioning, how much electricity is being produced, and can manage most of the plant's operations on this screen. While the turbines are controlled on these screens, the station itself is managed from San Jose, over a hundred kilometers away! Ronald actually lives in San Jose and commutes to the plant a week at a time. 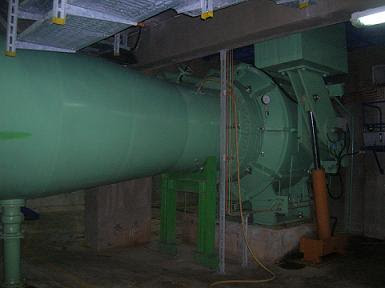 ¿How Much Water from Hydropower?
At the lowest of three levels in the Peñas Blancas hydroelectric power plant is where two of these contraptions are located. A large tube carries water from the Peñas Blancas River down to the plant, where it is split into two tubes to feed the two Francis turbines. At maximum capacity, each tube shoots 18 cubic meters of water through...per second! The water flows through each of the tubes through a spherical valve, which is responsible for starting and stopping water flow. Keep in mind that the water flows from the left of the picture to the right, where the large spherical valve is located. This plant receives around 2,000,000 cubic meters of water per day! 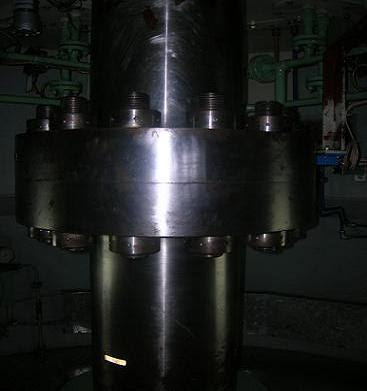 Hydropower Turbine Axle
The rushing water flows through the open spherical valve and hits the Francis turbine, which in turn begins to spin rapidly. The turbine is connected to a vertical axle which is pictured here. The axle is also connected by these enormous bolts to the generator axle above it, which turns the generator. This connection between the turbine and the generator is responsible for turning mechanical energy into electrical energy. This entire contraption will spin at a nominal speed of 514 revolutions per minute. Our tour guide Ronald had to make sure the operators didn't plan on turning it while we were in there, these machines can be incredibly dangerous to those without proper training. 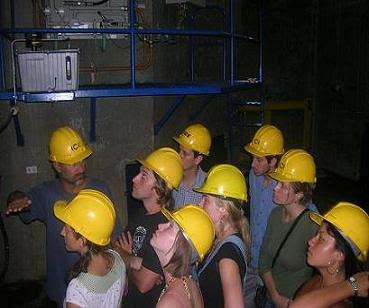 How Does the Spherical Valve Work Miguel?
Miguel explained how exactly the spherical valve works. The valve cannot regulate the amount of water coming through; it can only turn the water flow on and off. The power plant is 135 meters lower in elevation than the dam, meaning that a great deal of water is coming towards the plant at a high velocity. 'Head' as it is referred to, is the altitude difference between a reservoir and the hydroelectric plant. The water thus comes through with a lot of pressure in order to turn the turbines. When water flow must be cut off, pressure to the hydraulic system is reduced, which allows a weight to close the valve automatically. 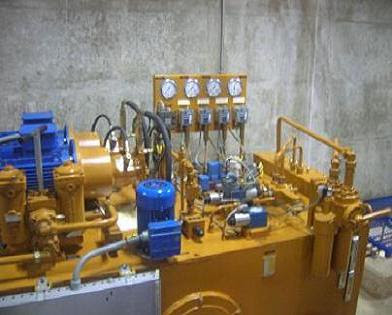 Hydroelectric Hydraulics Revisited
Hydraulic power is used for a few different things at the Peñas Blancas hydroelectric plant. First and foremost, the spherical valve which turns the water flow on and off is regulated by a hydraulic system. There is also an emergency brake at the plant, just in case. This is just one of the many safety measures taken by ICE in constructing this plant. The brake is simply a piston which, through hydraulics, is pushed up into the generator to stop it in case of emergency. The hydraulic system also controls the blades of the Francis turbines and shifts their angle to the water in order to maximize efficiency. All of these hydraulic systems are controlled by the machine pictured above. 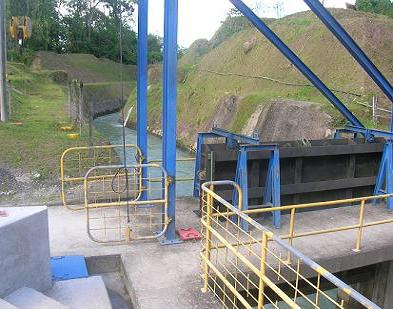 Where Does the Water Go After the Hydroelectric Plant?
Once the water is forced through the turbine, it drops down into a canal that stretches 1,976 meters back to the Peñas Blancas River. In this way, the station can be seen as a closed system. It diverges water from the river, through the plant, and back to the river. Although hydroelectric projects do not contribute to global warming, they do have a very serious impact on their immediate surroundings. The river dries up as most of the water is held up in a reservoir, which floods immense stretches of land containing ecosystems and cities. Costa Rica derives 70% of its electricity from hydropower.

Posted by Earth Education International at 10:17 AM