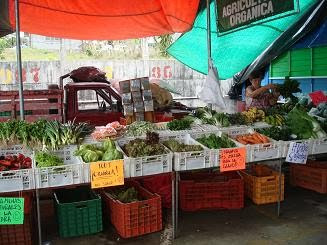 La Fería: Doña Adita's Stand
This picture was taken at the Farmers Market (Fería) in San Ramón. It is Doña Adita´s stand, which is the only organic booth at the Fería! Doña Adita collects various farmers´ organic products and sells them at her booth. Products that she sells consist of bananas, carrots, lettuce, cilantro, and many more. Devon and I went to the Fería to sell Patriana´s organic products. Strangely enough, we didn´t sell coffee. Instead, we sold rosemary and oregano, which Devon and I pruned; and organic compost that we made. Unfortunately, while we were there, none of our products sold. La Finca Patriana had us go to the Fería to figure out if it was worth their time and work in order to make profit. Now, at least they know not to waste their time selling their products at the Fería. 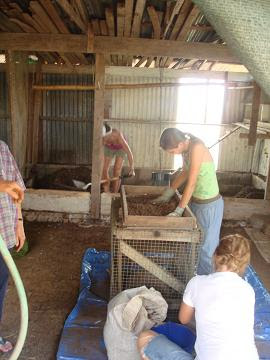 Making Organic Compost
This picture was taken at the finca inside the chicken shed. We composted organic materials here in order to make soil. In the back, Devon is turning the chicken manure with a shovel. This needs to be done when the compost has reached a temperature of 140 degrees celcius. Niki is in the middle sifting out the large materials in the compost. The large materials consist of mainly hay and straw. I am in the front mixing chicken and horse manure. Patricia is on the left, supervising us workers. Even though we were dealing with manure, we always had a good time! 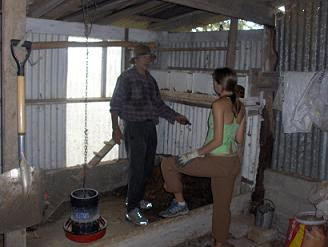 Organic Composting Shed
Here is a picture of me learning about composting from Gary. This is a picture of inside the composting shed. We helped manage, shovel, and were involved in making the organic composted fertilizer in which they used on the coffee farm and sold it to the community as well. When Gary would receive his horse manure form the neighbor we would put it into the left side of the composting shed in a big pile. At first in needs to sit under a black tarp for a few days to ¨cook.¨ When the pile heats up to about 140 Celsius, we would shovel in to the other side to aerate it. The compost heat up so hot! This is because the matter and bacteria in the pile is breaking down. This process of aerating and cooking goes on for about one and a half weeks, and then can be moved onto a large tarp to add an extra nutrient, and dry for about 3 days. Now it is officially organic fertilizer rich in nutrients!! Working on the farm for Gary and Patricia was truly and amazing experience. They are very inspiring people who we learn so much from!

Author: Nicole Lynch
Posted by Earth Education International at 11:23 AM